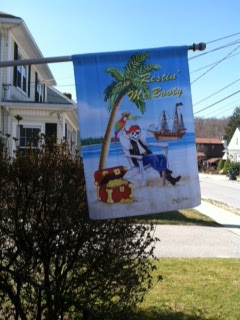 
This is my short list of pirate facts and other things:

1.  Yes the flag in the picture is hanging outside my house on an unusually warm day in March in New England.

2.  Pirates are often shown with parrots because in the 1600's, 1700's etc., these were considered "exotic" and were therefore somewhat valuable.  Never accuse a pirate of not wanting to make a quick buck.

3.  In my pirate reading I have found that it was not really known for pirates to use "walking the plank" as a punishment.  More usual punishments for wayward pirates that upset their captains were the wonderful practice of leaving them on an uninhabited island to die or the warm thought of tying them to the mast to starve.

4.  This is for my fellow rum lovers.  Yes, Captain Morgan was a real pirate named Captain Henry Morgan, who was actually the British Governor of Jamaica for a time during the 1600's.  I prefer Gosling's rum, especially the Dark Rum which makes a great Dark and Stormy.

5.  A Dark and Stormy is the world's best drink mixing Dark Rum (preferably Goslings) with Ginger Beer (not ginger ale).  This drink came to popularity in Bermuda and I'm sure all good pirates drink it.

6.  Rhode Island was considered a great place for pirates in the 1600's and 1700's because of vagaries of its coastline with many safe inlets and the corruptibility of the government.  i.e. the term "Rogue's Island".  Some things never change.

All you readers join this blog for it's A-Z of Jimmy Buffett songs starting April 1, or I'll have to tie you to the mast.
Posted by pbquig at 4:06 PM