WHEN THE MONEY TREE IS CHOPPED DOWN: Thoughts from a bankruptcy attorney 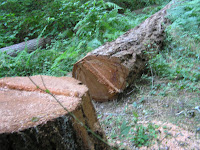 I personally have never had a good sense of the value of money. My husband will strongly agree to that fact. However, in my years of practice in the area of Bankruptcy I came to see that people were defining themselves and their self worth by money or the lack thereof.

My bankruptcy clients were some of my favorite clients because they were the exact opposite of the people that the credit card companies and banks stated they were. In the over 100 bankrupticies that I represented clients in, I can count on one hand people that might have been "trying to get away without paying", trying to defraud the creditors in any way or being in contempt of the bankruptcy process.

My clients were good people that fell on hard times. They were people that had been out of work for various reasons and had still tried their best to keep up with payments. They were people who did not come out well after a divorce and were overwhelmed. They were people who were sick and had minimal health insurance, if any at all. These people tried everything before coming to see me. They would try to work out something with their creditors and were often rebuffed. They went to Consumer Credit Counseling (at that time owned by the major credit cards) and were given a plan that was impossible to implement if they wanted to eat or clothe their children. I can say that every one of them did not want to see me and file a bankruptcy.

What saddened me the most was how embarrassed these people were who, usually through no fault of their own, were having to take a step that they found distasteful and ugly. The bankruptcy statues were set up as a "fresh start" for people whose obligations were way beyond their ability to pay. I tried to make them see it this way, but so much of their self esteem was tied up in money and the ability to provide for their families that they usually could not. Yes, some were not the best money managers on the block and some shopped a bit, but I had few gamblers and most of the people I saw had sincerely tried in every way possible to make good on their debts.

The bankruptcy laws have since been "reformed" by the strong credit card lobby in congress making it even more difficult for people to get this fresh start.

I learned through this experience that your self esteem should never be tied up in money. We are all trying our best to get by and money should never ever define the person that you are. Throughout my years of practice I learned from my clients and I can only hope that they learned to be proud of themselves.

I know the quote below is more of an environmental statement, but it does sum up my thought: 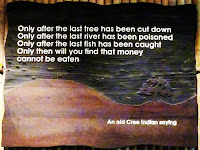 Written for the GBE2 blogging project.
Posted by pbquig at 4:55 PM